On the Fire piece, I used one layer of the woven iron-on interfacing, and inserted a slender metal rod in the bottom hem to add weight and stiffness at the bottom edge (which is where there is most likely to be rippling). The woven interfacing added just enough crispness to the cloth, without making it feel as if it had been turned into a surf-board.

The Ice & Reflections piece was a bigger challenge. First, it's about twice the size; second, it hangs with the warp running side to side; third, because the area of the picture where there are more interlacements is the zone around the water line, where the pale gold comes to the face most and consequently the pale silver goes to the back more, and also the black warp comes to the face more to make the trees. Where there are more interlacements, the cloth takes up differently, and there was no hope of persuading it to become politely rectangular, even with the most careful steaming. Believe me, I tried!

Which meant that on 3 sides (top hem, right side, and left side), I needed to account for the non-rectangular nature of the cloth. I also wanted to reduce the number of loose bits that had to be carefully placed when I ironed on the backing. Which meant several preliminary steps.

First, I turned back ever so slightly and stay-stitched the two lower corners so they wouldn't show once pressed to the back. Second, I used a couple of very narrow strips of two-sided fusible stuff (Stitch Witchery?) to tack down the left and right side hems. Third, I ironed on the main backing piece, which is the black nonwoven interfacing that holds down the left and right side hems in a more thorough way, as well as adding heft and stability to the hanging.

Then I turned my attention to the top hem. The top corners needed a little gentle nudging, so they wouldn't show once pressed to the back. Thank heavens for ease-stitching and steam! Also, I had the line of the (perfectly rectangular) interfacing to use as a turn line. Then I ironed on a 1-inch strip of the nonwoven interfacing to hold the top hem in place and add more stability.

Finally, because there is no bottom hem, and thus no place to insert a metal rod to ensure the hem hangs in a straight line right-to-left with no ripples, I cut a 2-inch strip of the interfacing and applied it on top of the main interfacing.

Whew! A lot of ironing, but overall a lot less stressful on the hands than hand-stitching 3 entire hems. Plus, the piece hangs straight as a plumb-line. DH complains that he can see the line the pressing has made at the edge of the turned-back hems, but that's also present on the hand-stitched pieces (which of course have double-turned hems, making a more definite line) so I'm not sure that's something that only happens with iron-on backing. 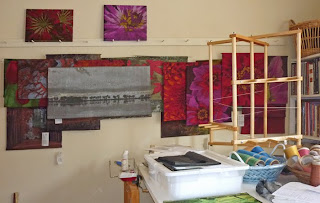 As usual, the work table is covered with stuff: yarns for future projects, my warping reel which is mostly unused since I am more likely to make sectional warps using the AVL warping wheel, and various other things "in short-term storage."

Here's a closeup showing how straight the piece hangs: 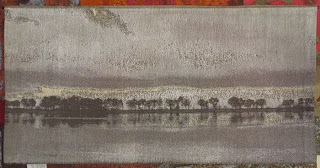 No final decision on the process, yet, but as I said, it looks promising.
Posted by Sandra Rude at 6:22 PM

Heh - glad to see a table as used as mine is! :D
cheers,
Laura
ps - love the piece made from Cally's photo

What a gorgeous gallery wall!