The Good, and Some Truly Ugly

The good news is that the Elements exhibition in Thousand Oaks has accepted both the pieces I entered: Fire, and Ice & Reflections. That means now I have to finish them; they're both already wet-finished, but now they need hems and hanging rods or stretchers to be ready for delivery on May 1. Fire, in particular, was not designed with an image layout that will allow mounting on canvas stretchers without losing too much of the design, so it really should have hems.

Unfortunately, I have been finding that the arthritis in my hands (especially the right, of course, because I'm right-handed) very emphatically doesn't like to do hand-stitching. Holding and placing pins in a hem, or holding a needle and thread to blind-stitch a hem, is just torture the day after. So I'm exploring other ways of finishing the hemmed pieces.

When I use a canvas stretcher, I back the cloth with a light-weight, non-woven, iron-on interfacing to reinforce the corners and edges so the tension of the cloth against sharp edges of wood doesn't distort the cloth. So I thought, "Why not press back the top and bottom hems, and use iron-on interfacing to hold the hems down and add a little body and crispness to the cloth? That would also avoid the bulk of the twice-turned hems because the stitched raw edges would be completely covered by the interfacing."

Yesterday, I made several small samples, using some pieces of old weave blankets and color samples (each with one turned-up and pressed hem) and several types of iron-on stuff. Not terribly exciting on a visual level, but as test samples, they really work well. 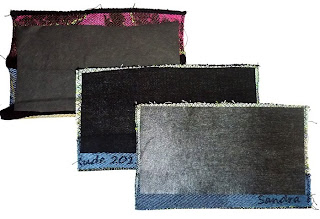 Upper left is something the salesperson at the local quilt store tried to convince me was the perfect material. It's Sulky Totally Stable, which is a tear-away backing intended for machine embroidery. First, it has a really nasty, slick feel reminiscent of butcher paper. And second, it doesn't seem like it'll stay on for a long time (I can easily peel it up, although the salesperson said to just iron it longer and it would be okay). This one is downright ugly - and not even close to the right stuff. Plus, because it's sold in small packages, it's way too expensive.

The middle sample is light-weight Pellon woven interfacing, and it has a nice hand (well, yeah, it's cotton cloth!) and can't be peeled off at all. Because it's woven, though, it has some stretch on the bias so might eventually allow some sagging and stretching.

The lower right sample is Pellon non-woven interfacing a little heavier than what I've been using for the canvas stretcher pieces. It's a little slick feeling, which is obvious from the way it reflects the light from the camera flash. On the plus side, it has very little stretch in any direction, and gives the cloth a nice crisp body. Again, once it's ironed on, it's there. No peeling. Plus, it's less expensive than the woven version. Which may be the deciding factor, especially if I can find it online, or convince one of the local stores to order it by the bolt with a small discount.

Just to end on a bright note, the poppies on the hill behind the house have taken over from the daffodils and are the epitome of cheerful: 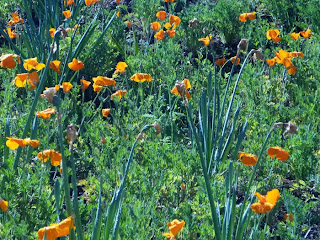 If you had some nice fabric for the back, could you make your own interfacing, so to speak, by sandwiching it with fusible web and ironing that down? Though I guess you get the issue of hemming the other fabric.
Teena Tuenge

recently I am using the zip gun
instead of needles http://www.thesewbox.com/catalog/item/6827893/6886913.htm
perhaps something for you I like it verry much

I like your solution to the backing problem. I, too, have difficulty handstitching but it sounds like my hands are not as bad off as yours are these days. It's such poetic injustice, isn't it?
Glad you've got sun down your way, it poured all day here!
Have a great weekend.