If you thought the warp on the jacquard loom looked like a disaster area, you will appreciate the warp on the dobby loom. This is how I have rectified the discrepancy described in the previous post. First, the overall view: 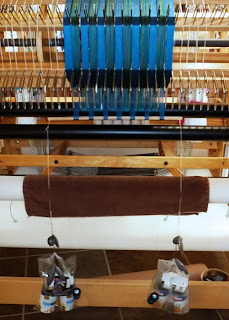 Note the fashionable soup cans in carry bags (Swanson's chicken broth, no less). Here's a closeup of the dowel "beam:" 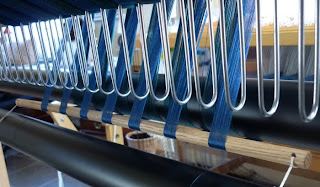 The 60/2 warp sections go directly behind and under the upper black powder-coated steel roller, and the 120/2 sections go around the dowel, then under the same roller. It may look fairly tidy now, but you should have seen it before everything was tensioned (and therefore necessarily, obligatorily tidy). Getting to that point was a circus act, believe me.

I've woven a header, and overnight am going to consider whether I need to re-sley on a 10-dent reed instead of the current 12-dent reed. The double-faced satin areas are having a hard time making a clean shed, so something has got to give.

But right now, DH is cooking a chicken curry, and the enticing aroma has thoroughly saturated the computer room, so "Bye, gotta run..."
Posted by Sandra Rude at 6:55 PM

Oh dear - having to resley after just having got everything all tidy. :( Hopefully the resleying will work and you'll be able to weave in peace at last!
cheers,
Laura
oooooo! My word verification is
"monstr" :O

I hope he doesn't need any broth for that curry...