To quote Robert Burns, they oft go agley. As in "woops, this isn't working!"
The weaving plans for this warp have changed, much as the warping plans changed. It was going to be stripes of plain weave and stripes of double-faced 5-end satin.

As I wove a test inch, it became obvious quickly that the stripes of double-faced satin, although within the bounds of reasonableness on the sett spreadsheet, were too closely sett to be happy about making a decent shed. And the difference in effective epi between the plain weave stripes and the satin stripes was noticeable: the plain weave beat in at one rate, the satin beat in at a vastly reduced rate, making the fell line look like a carnival ride - up and down and up and down.

Out came Oelsner. I looked for a 10-end structure that could replace the plain weave. Aha! Crepe! I chose a draft (and downloaded the wif file from Handweaving.net) that had fairly short floats - just enough so the sheer stripes could beat down a little bit and more closely match the satin stripes.

In the satin stripes, the original draft had each weft interlacing with one end of the back warp and one end of the face warp on each pick. Too many interlacements was part of the problem in getting a decent shed, so I changed the draft for those stripes so the weft interlaced one end of the back warp on the odd sheds and one end of the face warp on the even sheds. the alternative would have been to resley at a more open sett, and I couldn't figure out how to open up the satin stripes the desired amount without making the plain weave stripes too sleazy. Plus I didn't want to upset the apple cart in terms of the dowel and weights, which were working just fine...

Voila! Weaving is now possible! Here's the face of the cloth - you may be able to make out the crepe if you click to enlarge: 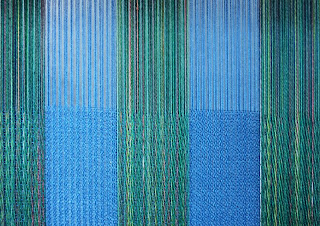 I'm weaving with the green face up - the more visually stimulating side because it has the most color variation.

Here's the back side: 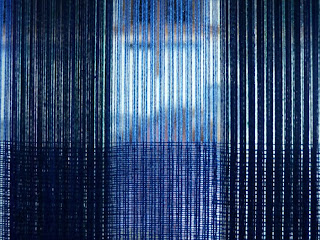 I was holding the camera under the cloth near the fell line, facing up. You can just make out the top of my head just at the fell, and the dark rectangle of the dobby control box at the top of the picture.

And the reed marks. Oh my! Of course, photographing a dark surface against a light background makes the reed marks even more obvious. I hope they'll disappear during wet finishing (they usually do). Anyway, that's where we are today.
Posted by Sandra Rude at 6:54 PM

Why one should sample?

Ummm. I thought that's what scarves are: full size samples........... In any case, I've learned a lot from this non-sample, and am happy with the results.