During a discussion of methods for mounting artwork, a friend (thank you, Michael!) pointed me to a type of frame called a floater frame, of which you can see examples here. They are designed for painted canvases, and one could say that is what I make; they are just painted with thread, not oil or acrylic paint.

The commercially available versions are expensive, and made with the artist in mind, not the woodworker. Since I have one of the latter inhouse, we've adapted the idea so that DH can construct the frames for me at a far lower cost-per-linear-inch than the pre-manufactured ones.

We chose a simple "L"-shaped profile, and found a reasonable facsimile at the local big-box DIY store. DH has the tools to turn 10-foot lengths of unfinished-but appropriately-L-shaped wood into custom frames spray-painted black.

As a prototype, we chose one of my earlier, smaller pieces that's already mounted on a canvas stretcher: 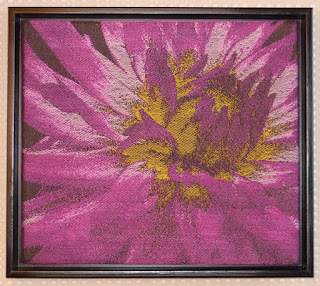 This closeup might give a better idea of the "moat" surrounding the canvas: 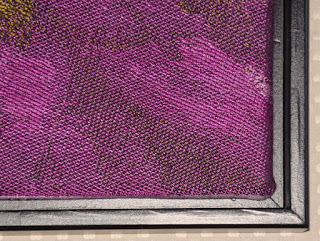 Oh, well, it also gives a view of the lumpy corner on this one. Too bad. It's a prototype, after all.
Posted by Sandra Rude at 6:57 PM

lumpy corner LOL! you are too funny.

I think the new framing method is a winner!