Most of today's studio time I spent twisting fringes on the brown scarves, which I cut off the loom yesterday. However, I can only twist fringes for a limited amount of time (stress on the hands, mostly) so I took a break to work on the jacquard loom.

The second Fire image is at the 1200-pick mark, or two-thirds completed. 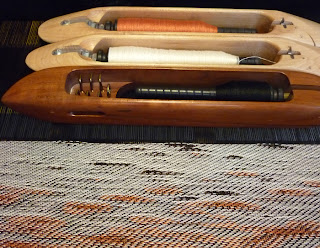 The next few hundred picks will be fun to weave, with lots of pattern areas and ripples, and then I reach the part where everything is black. Boring!
Posted by Sandra Rude at 10:31 PM

Oh my, I have been missing out on these stunning images and now I am overdosing on all your posts at once! The rippled texture is mesmerising and it really doesn't look like flat cloth at all. Wonderful!