Something Different on the Way

Hey, what's that you say? Why is there a white warp being beamed onto the jacquard loom? And a short and narrow warp (relatively) to boot? 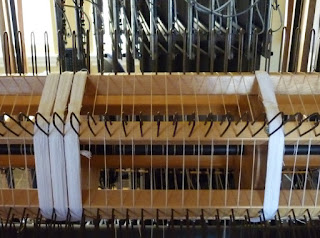 This warp is only 16 inches wide. I wind the two outer sections first, because they're a different number of threads, and doing them first helps ensure I remember they're different! It's also a very short warp, only 4 yards.

And what the heck is she doing to that poor warping wheel? 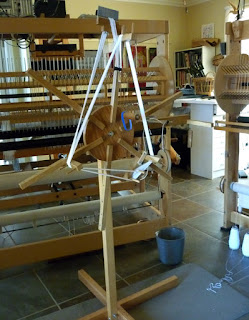 Okay, this is just Sandra being lazy. Normally, I wouldn't use the warping wheel for such a short warp. However, adapting the WW for a short warp seemed like it would be faster than moving a plain (nonsectional) beam from the dobby loom to the jacquard loom and winding a conventional warp on my reel.

The only way to adapt the WW was to remove 3 of the 6 yarn holding "branches" (not the technical term, which I can't think of at the moment) and just use 3 arms. The length of the arm that has the comb on it can't be adjusted, but all the others have 4 possible positions. The closest I could get to 4 yards was 3 arms with 2 of the branches minimized to their lowest position.

The reason for this unusual project on the jacquard loom is an unusual person. One of DH's uncles is a Jesuit priest. In fact, it was he who performed our marriage ceremony. Possibly the only person I know who can absolutely be labeled "a good man." Kind, understanding, nonjudgemental, forgiving, understanding... I could go on. He works in HIV/AIDS clinics, prisons, all the places the unwanted and hopeless are, he's there.

I've been thinking for a long time about weaving an ecclesiastical stole for him. Once, I asked what he wanted. "White." Which, to a Catholic, means it isn't limited to any particular time on the holy calendar.

You know me. Have I ever woven plain white cloth?? NOT!

So I sat with my weaving software and tried to create some appropriate motifs that could be woven white-on-white (but really not invisible, because the yarns would be matte and shiny, warp of  unmercerized 8/2 cotton and weft of 8/2 tencel). I sweat blood over designs using summer & winter, thick-n-thin (aka diversified plain weave) and all would require symmetrical patterns, on a point threading. Unfortunately, the design motif I wanted to use most is the Jesuit logo, which has (nonsymmetrical) letters plus small symmetrical graphical elements.

That meant using the jacquard loom instead. As it happens, I've just cut off the last pieces on the current jacquard warp. I figure I can beam a narrow, white warp, tie it on to the centermost four modules-worth of warp, pull through, and just leave the outer 8-modules-worth (4 on each side) to just hang out for a while, with a cross tied on each side behind the heddles, and a knot in front of the heddles. Once the stole is woven, I'll just beam a new black mercerized cotton warp, tie it onto the black threads in the outer modules and the white threads in the center 4 modules, and be merrily on my way. That's the plan. Much may change betwixt plan and reality.

Here's an example of a template for one of the design motifs. I've been advised to weave both the right and left sides at the same time, otherwise the two never match up. The grey strips are seam allowance. The black line up the middle is the cut line. I will make a template for each design motif: a cross, an open book, the Jesuit logo, an olive branch, etc. 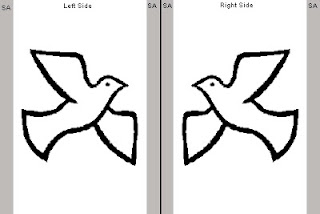 Using a single shuttle, it should go fast, right? (She says optimistically...)

me too, watching.
and i learn a lot of time saving tips from lazy sandra.