After some discussion, DH replaced two hooks on the jacquard loom. It is never quite possible to be sure whether the hooks were really bent, or whether the act of mucking about with them solves some unseen problem, like lint clogging the channel the hook rides in, or some other obscure but invisible condition. Whatever.

The important result is that after the replacement, and a few minutes of lifting a plain-weave sequence, everything began to work correctly. Hooray!

I started weaving the rose image I posted here. After 350 picks it looked like this: 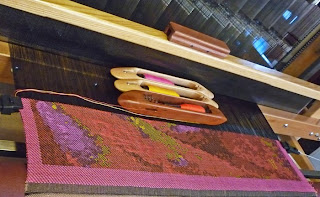 The colors of yarn I had in stock are close to those in the image, except the "red" is more of a "red-orange" hue.

Once I begin weaving, and if everything is going smoothly, I tend to just keep at it until my stomach starts complaining that dinner is due, so before I realized it, I had reached the 1000-pick mark: 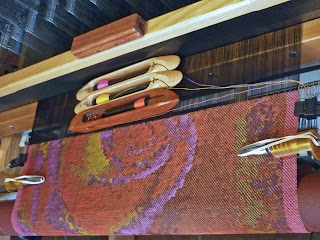 Every project I weave on the jacquard teaches me something about color. The border, which appears to be pink, is actually a 50:50 blend of the pink and the red-orange yarns. They're so close to the same value, you can't see them as a blend, you only see a solid color. And where the bubble-gum pink blends with black, it's not pink any more, it's more in the range of lavender-to-purple. The red-orange is browned by the black, and of course the yellow becomes green when it's in the minority compared to the black. The mysteries of color...

I only have about 200 picks of this piece left to weave tomorrow, then I'll begin the next one.
Posted by Sandra Rude at 6:43 PM

color is a fascinating subject. yesterday i saw on japanese t.v. a man who is a color hunter and designer.he also works w. traditional dyers in japan. the colors he creates are amazing.