Bring On the Dye Pots!

Last weekend, a lot of visitors were interested in the range of colors I get on yarn using wood chips from DH's shop floor. I thought that rather than show them cones of dyed yarn this weekend, it might be fun to have some dye pots in progress.

Wenge, an African hardwood used for furniture and musical instruments, among other things, is one I've never worked with. The wood is a dark coffee brown with tan streaks. The dyebath looks like it's planning to give me reddish brown: 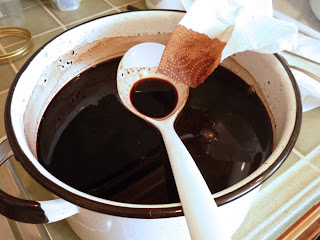 The yarn I've mordanted is Tencel, a cellulose just like the paper towel, so I suspect the towel is showing an accurate preview. Life in the world of natural dyes is full of surprises, though, so stay tuned.

Later in the day I prepared a pot of bloodwood, which is native to the deserts of central Australia. It appears to have a strong affinity for protein fibers - on silk I've gotten a very pretty coral pink. I'll report what it does on Tencel on Monday, after the Open Studios weekend is over.

The dye definitely stained the nylon strainer, as well as my skin and fingernails wherever it touched. And the stainless steel sink, too! Fortunately, a powdered cleanser with bleach took care of the sink, and I have a special dye-removing cleanser  (a gritty cream called ReDuRan) for scrubbing hands that come into contact with dye. Dharma Trading carries it, as well as several other dye houses, and even Amazon. I frequently forget to wear gloves, so it's been a lifesaver more than a few times. 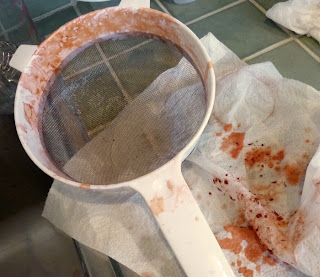 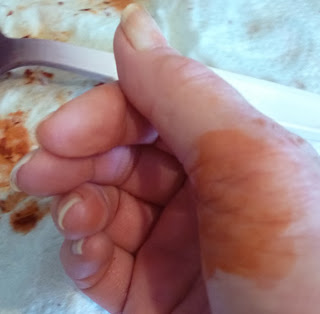 Altogether there are five dye pots now awaiting the weekend visitors: wenge, black acacia, osage orange, bloodwood, and quillabordon. They should produce a wide range of colors. However, the wood dyes don't like heat, which dulls the colors, so this is definitely in the category of slow cloth! The skeins may sit in the dye pots for several days to absorb as much color as they possibly can.
Posted by Sandra Rude at 6:43 PM

Helen Bressler said...
This comment has been removed by a blog administrator.
8:14 AM