For the past two weekends, the image I've been weaving on the jacquard loom is based on a photo taken at the family cabin on a small lake in Montana. I can be hypnotized for hours/days by the patterns on the water made by the changing breeze. The original photo, indexed to some greens and some blues is this one: 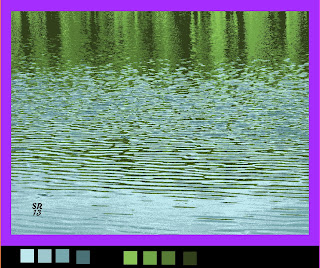 In the process of assigning weaves, that purple border became an equal blend of green and blue. Also, the strip of color chips vanished.

Since there isn't much warp left on the loom, I've been weaving only small amounts every day during Open Studios, so as to not use up all the warp - which would bring the jacquard weaving demonstrations to an abrupt halt. So by the end of the first weekend, this is where I'd gotten: 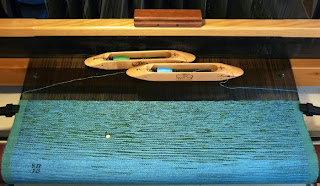 Here's a closeup of the rippled part of the image, so you can see how the blue weft appears and disappears, and the green weft appears in small increments: 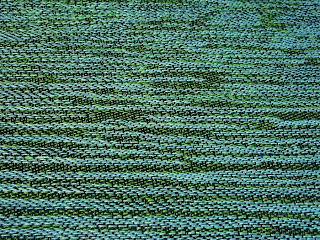 And the results of the wood-chip dye pots,  you ask? 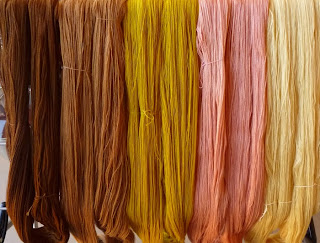 From left, Wenge, Black Acacia, Osage Orange, Bloodwood, Quillabordon. You can google each of the names, and find Wikipedia's definitions of what the wood looks like - they show photos of some of them, and description of the colors in the wood of each one.  I'm quite happy with these colors, and can envision them in upcoming jacquard weaving.

However, now I want to wind off and mordant some skeins of silk (these are Tencel) and put them into the dyepots. There's a ton of color left in each pot! It will be interesting to compare the final colors of the different fiber types. Stay tuned!

Wow that is going to be stunning when it's finished! I love blues and greens!

I didn't realise you could dye yarn from wood and get such a variety of colours! Amazing!

Your wood-chip palette is gorgeous.

It is amazing how well these colours go together, I can see this used in a double cloth with warp and weft interchange!