And Did I Mention the Knots?

In an earlier post, I said that the silk I'm using for warp is just *full* of slubs and knots. If I had paid full retail price for the yarn, I'd be really unhappy, but I didn't so I'm not complaining as loudly as I might. 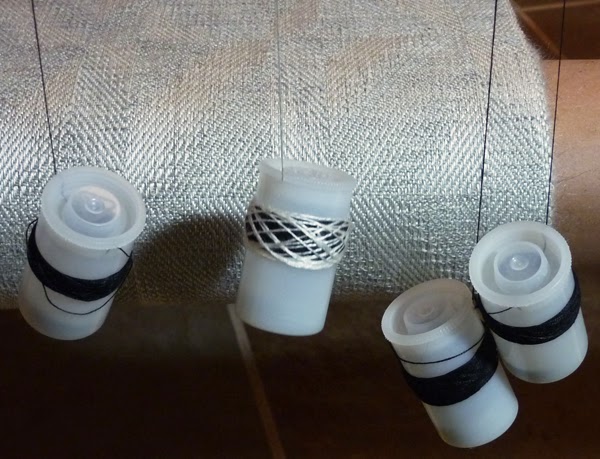 This is what the back of the loom looks like, and I've only woven the first half of the third scarf, so there are bound to be more film canisters back there before I'm done.

The black thread is just a "leader," like a fishing line, which allows me to cut a replacement piece of silk that's just barely long enough - the black thread lets the canister hang down from the loom without wasting silk thread.

The first scarf had about 4 or 5 knots, the second scarf came in at 6. It would have been more, but I eliminated a lot of knots during the process of winding the warp, something I rarely take the time to do. Usually, it's faster to replace a knotted warp end in the middle of the weaving than try to correct it while winding onto the warping wheel with 4 threads at a time - too much risk of tangles and differences of tension.

Here's what scarf #3 looks like on the loom. Because the aspect ratio is not 1:1, the design is stretched in the warpwise direction, which I don't mind at all. I like the "fractured" effect! 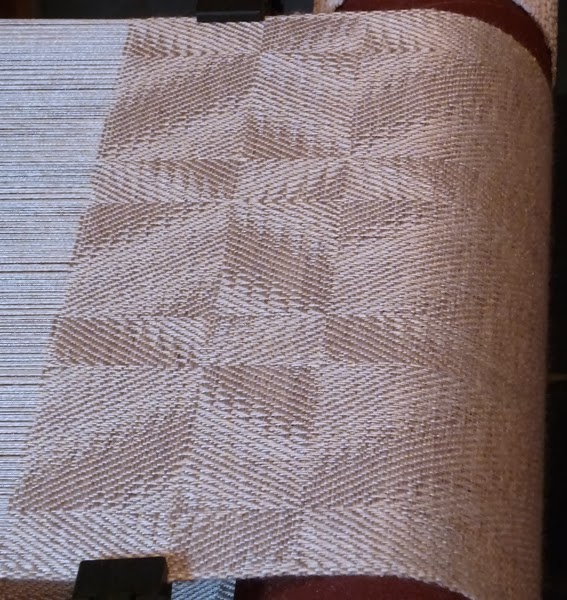 How annoying, all the knots. Really like the scarves. I bet they will be lovely and soft after wet finishing.

I really like the way these scarves look. Not familiar with your fiber, but I think these would look great in tencel, too.