As in, wet finished. I'm really delighted with how the cloth feels after finishing. I hand washed it in cool water, rinsed once with a glug of vinegar and once with plain water. Rolled them in a towel and stomped on them. Let them air-dry for a while, then pressed. Trimmed the fringes even, and pressed again.

Soft, airy, smooshy, not at all scratchy. The Polwarth wool from New Zealand, is (according to several wool breeders' websites) almost as fine as Merino, being a cross of 3/4 Merino and 1/4 Lincoln, getting the staple length from the Lincoln side and the micron count from the Merino side. The 2-ply yarn I bought in Queenstown, NZ, back in 2001 has found a very useful purpose!

My McMorran balance rated it at about 4,500 ypp, which would be the equivalent of 16/2 (worsted count). But because it was woolen spun, and intended for lace knitting, it's much airier than a worsted yarn. For the first piece on the warp, I sett the yarn at 30 epi, which I decided was too close. So the last three shawls were sett at 24 epi, which resulted in a much more satisfactory cloth.

Sorry, no glamorous model, just a selfie-in-a-mirror. Yes, I know, if I used my smartphone instead of a digital camera, I could take the photo without the mirror. Instead, I used what was handy. 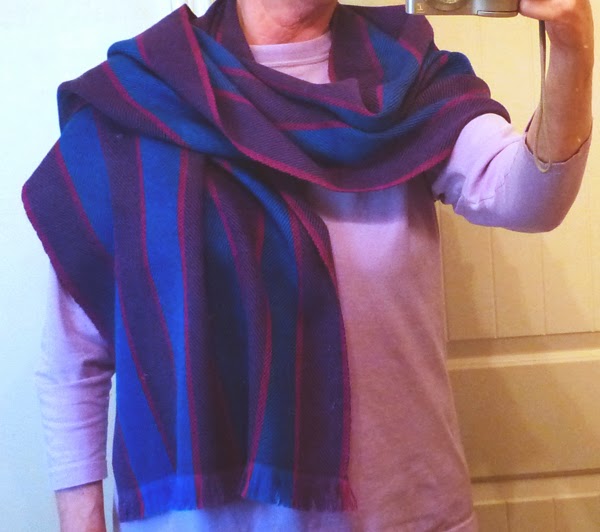 If I had combed my hair and put on some makeup, you'd see my head, not just the torso...

There are two more shawls to be finished, but I wanted at least two to be ready for the Paso ArtsFest this coming Saturday. If you want to fondle cloth made of really yummy wool, be sure to get there early!
Posted by Sandra Rude at 7:03 PM