I spent this afternoon applying interfacing to the backs of all the newly woven and wet-finished jacquard pieces. I find that this helps reinforce the cloth where it bends sharply around the corners of the canvas stretcher, and helps keep the cloth from sagging in the middle, where there's little or no support - especially if the piece gets shipped, packed tightly in bubblewrap that presses on all the non-supported areas.

The outside temperature was 104F (40C), so standing over a hot iron wasn't my idea of fun, but the ACC show is coming up in a week so I had no choice.

Usually, I have no trouble choosing titles for my pieces. I often weave flowers, so "Rose I" and Chrysanthemum II" are pretty obvious. Likewise, if it's a landscape, the name of the place works just fine. With the abstracts I've been working on, titles are a little more challenging. This one, for instance, is still nameless: 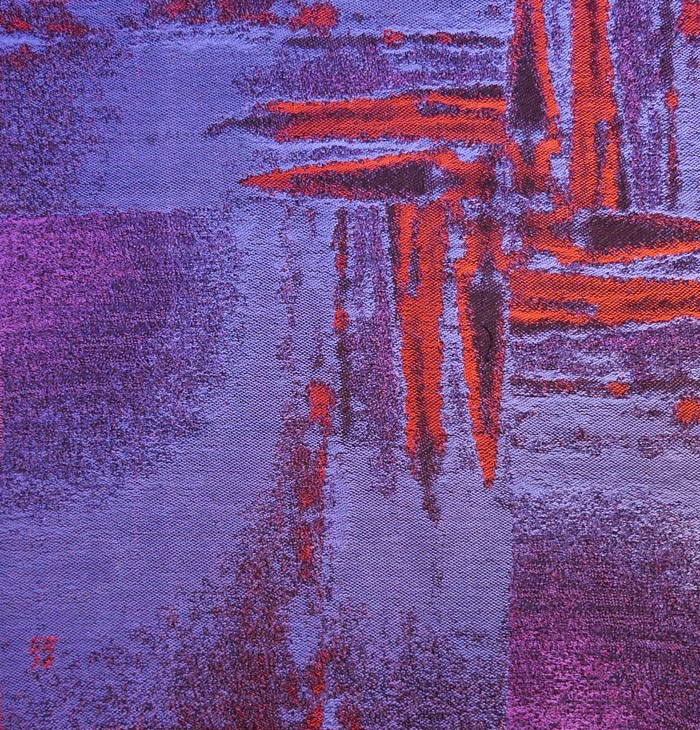 It began as a photograph taken in the arctic at sunset. I messed with it in Repper, and ended up with a version whose four quadrants were rotated with relation to the adjacent quadrants. I then cropped it so I had all of one quadrant, but only parts of the other three. Then when it came time to sit down at the loom, I wanted the most vivid color (that red) to be the highlight of the design, not part of the background, so I changed the order of throwing the shuttles. Which means my weaving bears little or no relation to the original photo. Is "abstractify" a word?

My problem is, what to call it? "Quadrant?" "Signpost?" I'd be grateful for any suggestions!

After putting in my time over the ironing board, I got back to the dobby loom and finished runner 2 (last shown at the bottom of this post) and began runner 3, which has a black weft and a treadling consisting of small advancing shapes that serve to elongate the design lengthwise: 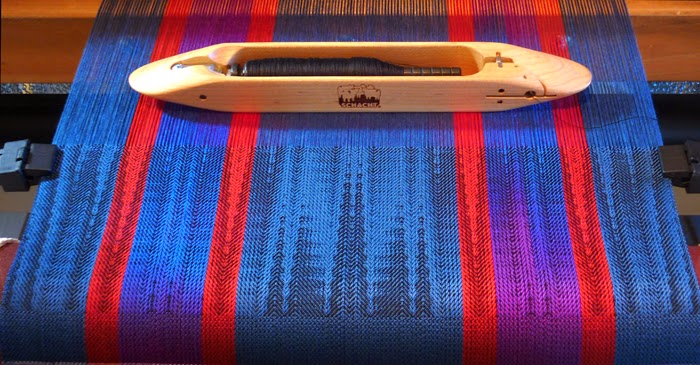 Dancers is what I see in the picture
Mary

Sorry, no suggestions for titles. But I do find your method of wet finishing before wrapping around the supports interesting & helpful. Will file that one away!

Dancers or Icicles at Sunset.
Poles apart I know!

It looks to me like an abstract dancer who is on her toes with one foot and flinging the other leg out.
I'd call it Jubilation or something.
Teena Tuenge

irony of the sun

Now that others have said dancers I see them, but didn't initially. I saw Fire & Ice.

I LOVE the runner!!!

I'd be inclined to stay with the abstraction and call it "Marks" or something of that ilk. I love it, whatever its name is.