Tuesday night, as a late birthday present, DH took me to the CSN concert at a local winery that has built an amphitheatre for special events. This one was really special. 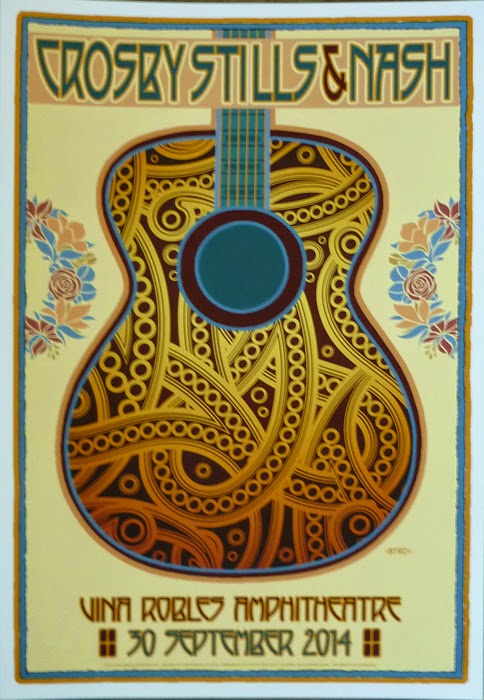 DH says he saw CSN originally almost 45 years ago today - September 1969 at the Greek Theater in Los Angeles. They haven't changed much, except their hair (Crosby and Nash, at least) is silver-white, although the haircuts are the same as ever. They're still happily subversive, they still write great lyrics, and all of them are very expressive about both their politics and their life experiences.

Stills doesn't have much voice left, but man, can he play the guitar - whether acoustic or electric. As Nash says, Stills is the best lead guitar in the world.

Crosby and Nash still sing the beautiful, tight harmonies they always did, and the songs are as powerful as ever.

Your typical concert venue is too much of a challenge for a cellphone camera, so I apologize for this one - it's the best we got.

sounds like a wonderful time, I have always loved their music, and we are all getting older.

Apparently they're at the Greek Theatre in LA tonight. I'm so envious you got to see them. I've been petitioning Humboldt State Univ. Center Arts to bring them back, hopefully next year (2015-16 season). So glad you loved the show.