I use basket selvedges on almost everything (except plain weave cloth). I just plain don't like floating selvedges - too much manual manipulation to let me weave fast. With some design considerations kept in mind, basket makes a nice clean edge on fancy structures that otherwise would be difficult to achieve. But it does require 4 extra shafts (2 on each side of the cloth), in almost all cases.

In a comment on the previous post, Charlene asked to see the selvedge, so here's a description of my method and a photo of the selvedge on that last towel.

First of all, the selvedge has 5 threads (or some other odd number) on each side. Here's a closeup of the draft of that last towel, with WeaveIt set to show interlacement: 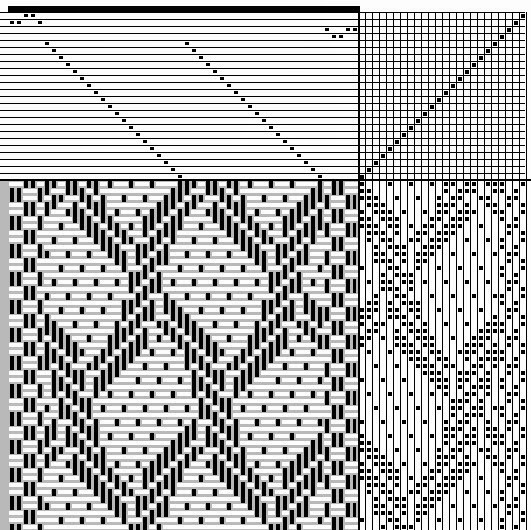 That extra single thread at the interface between the body of the cloth and the selvedge is very important: it helps to "cut" any floats that might tend to occur at that interface when you're working with a fancy twill or satin design. It might not catch all of 'em, but does get most. And for my purposes, with fine threads, most is good enough.

Also, it's important to note that the shuttle has to begin on the side of the cloth where the full basket occurs, not the side with the half basket at the top. If you don't start the shuttle on the correct side, the weft won't interlace with the outermost selvedge threads.

Here's what the selvedge looks like on the loom: 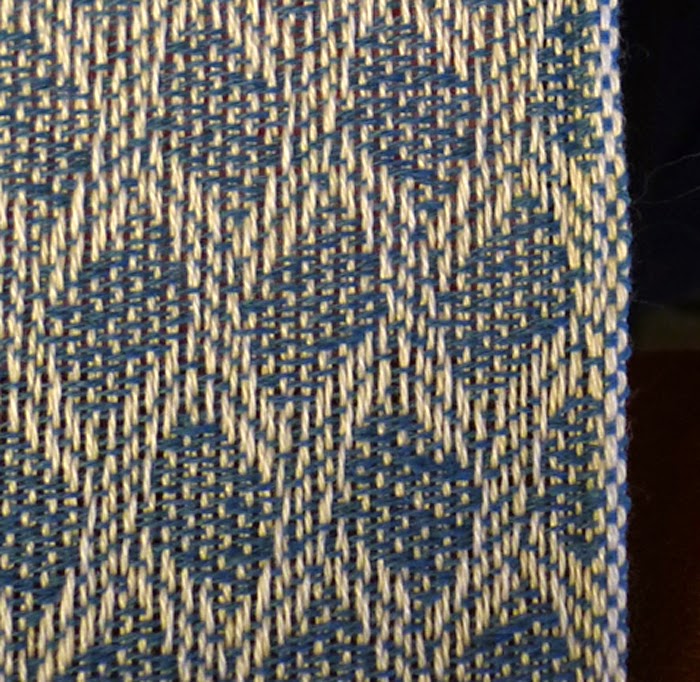 Anyway, that's my story and I'm sticking to it.

Thank you for this write up. I have wondered about using this technique but, if I do use an edging, use tabby. In theory, one should change the sett with tabby but in practise the edging is too narrow to bother. I have never noticed any problem. But perhaps you can tell us why you use this in preference to any other edging technique?

Thanks for this, Sandra. Now that I no longer use a fly shuttle, I don't mind floating selvages, EXCEPT for the problem of the thread on the right side gradually losing its twist & breaking. I'll try your basket weave selvages on my next towel warp.

Hi, Pat, I mostly weave twills and satins, and the basket selvedge takes up at approximately the same rate, whereas plainweave can make the edge wave, because the structure takes up less than the body of the cloth. I even use a basket selvedge on multi-shuttle weaves on the jacquard, by simply elongating the basket vertically to account for the fact that multiple wefts make up each pass. The takeup is fine even on those complex, multishuttle structures.

So, Sandra, you used a different (whiter) warp for the selvedge, yes? Or is that difference in appearance for some other reason?

Hi Sandra,
I have a 10H loom and I've tried doing a tabby selvedge on 8H twill weaves. I've had a problem with the edges not packing at the same rate. I'll try basket edges next to see if that helps.
Thanks for the tip.

Hi, Peg, the warp is all the same yarn. If it looks different, perhaps it's because a different structure reflects the light back at a different rate...

Hi Sandra.
Have you used doubleweave selvedges? I will be weaving a 3/1 turned twill, so I think basketweave will take up more than the body of the weaving. I'm not sure plain weave doubleweave would work any better. I don't remember where I saw the draft for dw selvedges. In my sampling I can try both and compare. I will have 8 extra shafts to work out a dw selvedge, possibly in 3/1 twill also. Can you show me the draft for it?
Thank you.