Back to Real Life

Since we got home in late August, I've been working (aka, "struggling") with the commission for my weaving pal Becky. The jacquard loom really did not appreciate being neglected for so long (most of 18 months, due to surgery and post-op rehab), and showed its displeasure by making as many invisible errors as possible. I say "invisible" because when tension is on the warp, while one weaves, it is nearly impossible to see those little floats that occur when a hook either rises when it shouldn't or fails to rise when it should.

Also, the brocade process (even thouigh it was limited to the middle section of the design) was slow. However, I'm very glad to have learned the design procedure (Thank You again, Bhakti and Alice) so I'm not complaining too loudly! I divided the design into 3 sections, only the middle one of which had brocade picks accounted for in the draft. That meant that sections 1 and 3 were easy, and only section 2 was unusual.

Before I could hand the finished weaving over to Becky to gift to her daughter and son-in-law, much time was spent with needle and thread mending as many of the floats as possible. Becky and her husband leave early tomorrow to visit their daughter, so today was the last possible delivery date from my perspective. Anyway, the deed is now done, Becky loves the piece, and she assures me that the kids will, too.

Here's the finished (as in woven, wet-finished, pressed, and with edges bound) wall-hanging: 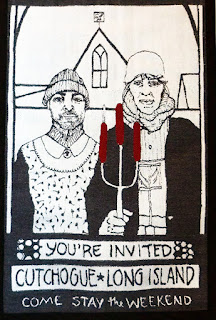 When I blogged about this piece last (was it really mid-August??), Janet asked in a comment why I would weave the piece face down, since I have a motor-assisted lifting system so the weight of the lifts shouldn't be an issue. There are two reasons: First, even with a lift assist, I don't want to wear out the motor that does the heavy work faster than necessary. Second, the change of direction of the brocade yarn is best hidden on the back of the cloth, and that is most easily done by weaving the cloth face down.

If you weave the brocade face up, the turning points (especially in a long twill like this) can be messy and I'd rather keep the mess on the back side. If you compare the face and reverse of the cloth, you can see what I mean. On the face, the edges are clean; on the reverse, the long floats are evident and would be kinda icky on the face...

Here's the face, followed by the reverse: 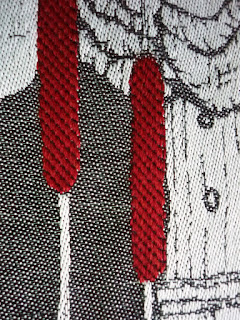 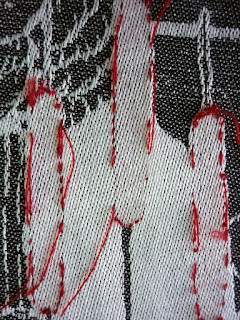 Both of these shots were taken of an un-wet-finished sample, which may make some difference, but not much. The structures I used, by the way, were the ones in the example in The Woven Pixel. The ground cloth is 1/7 and 7/1 satin, white weft on black warp, and the brocade is a 2/30 red wool in 1/7 twill. Well, it was woven as 1/7 twill, but on the face that became 7/1 twill.

In wildfire news, the fires in our area of Montana are now thankfully contained on the west, the side toward civilization. On the part inside The Bob (the Bob Marshall Wilderness Area), the blaze is monitored but not fought. Because of the direction of prevailing winds, our cabin was never really in danger. Monitoring will ensure that none of the hot spots gravitate toward the inhabited areas to the south, beyond the southern boundaries of the wilderness.

Once the rain and snow start in Montana (usually around Labor Day, the first week of September), it isn't long until no wildfire could possibly continue causing damage; we hope that's true of this year!

The fire season this year was brutal. Hoping for early snow, and lots of it,

Thanks for the explanation as to why to weave the brocade face down. In spite of the loom misbehaving, it's a wonderful piece.

Hope that the rains and snows arrive soon.

Just catching up. The brocade is very successful! Wonderful texture in the hot dogs.