We spent Thanksgiving in Los Angeles wth DH's parents. It being Southern California (albeit at 60 degrees [F] it was somewhat chilly for SoCal), some interesting things were in bloom in the garden, including this Bird of Paradise. The image has been indexed to 15 colors, with the intent of weaving it with 3 shuttles (blue, green, and gold). 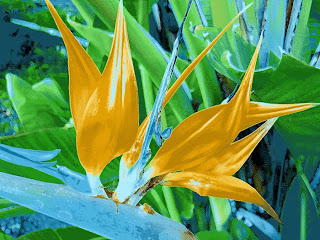 The last 3 sections of the towel warp were beamed this afternoon, and I promptly began threading. Here's a threader's-eye-view of the proceedings: 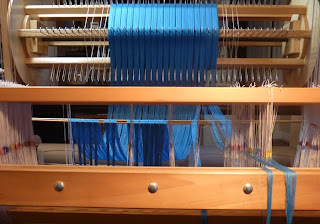 The reed and the top bar of the beater have been removed, leaving only the shuttle race in place. This makes it much easier to sit in a low chair and thread in a comfortable, reasonably ergonomic position. If you click the small image to enlarge, you can see that I've pulled toward the middle of the shafts the heddles for the next couple of threading groups. Queueing up several groups makes the threading go faster - as does the music in the background :-)
Posted by Sandra Rude at 5:33 PM

my birds of paradise are blooming too.
agree with laura, music and i would add some tea too :)