The last couple of skeins of towel warp yarn found their way onto cones. It was a gradual process because the winder motor really doesn't want to do more than one skein at a stretch. I was amazed (and pleased!) that the skeins, though larger than I usually cope with, behaved beautifully both in the dyepot and on the transition back onto cones. Not a single snag, snarl, tangle, or knot! That will make the weaving a lot easier, if I don't have to worry about broken ends and replacing ends that have knots.

Here's the beaming progress so far: 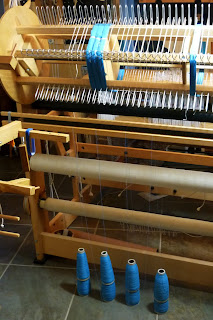 Not terribly impressive, but it'll go faster tomorrow - I've downloaded the newest WeaveCast interview to listen to, which will make the time just fly by! I always wind the outer sections first, especially if they have a different number of ends than the middle sections, then the rest of the sections. (In this case, each of the two outermost sections has 2 fewer ends than the rest.)

As a reward to myself for the seemingly interminable cone-winding process, I wove a little more on the latest jacquard weaving, the image of big-leaf maple leaves: 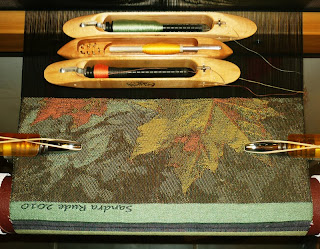 You might want to consider replacing the motor (you are using a double-ended electric bobbin winder that uses a sewing machine motor, right?). Mine burned out, and I replaced it with a heavier-duty one. This one will wind for hours without overheating.