The weft yarns for the towels are finally dry, but will have to wait until after the weekend for me to wind the yarns onto cones. Here are the skeins - all closely related in hue - with the small skein of hem weft that matches the warp draped across 3 skeins for the body of the towels: 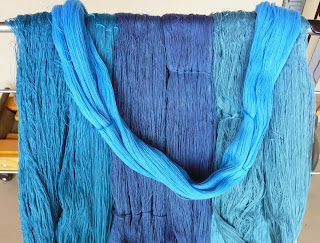 So far, I've managed to wind just one of those big warp skein onto 2 cones, but then had to turn off the bobbin/cone winder because the poor little sewing machine motor had overheated. If you've done any dressmaking, you know how it is. Sewing machine motors rarely have to run for 30 minutes uninterrupted. You sew a seam, you press the seam, you pin the next seam and sew it. By that time (if you have a modern iron with auto-shutoff - grrrrrrr!) the iron has cooled, and you have to wait for it to reheat before continuing. Therefore, the sewing machine motor has plenty of time to cool off between uses.

Re: modern irons: I know it solves the "oh @$^%#, did I remember to turn the iron off?" problem, but I hate it when a mere appliance thinks it knows better than I do. "Quitting time! Tough luck!"

So to reward myself for tolerating this weakness on the part of sewing machine motors, I started another jacquard weaving, this one of big-leaf-maple leaves. I know, I said I was going to work on the sycamore images, but Mr. Maple just elbowed his way to the top of the queue... 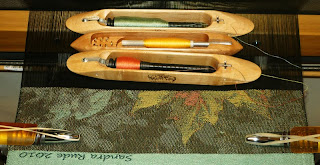 This is another image I've woven before (shown here back in February), but this time instead of a two-weft structure, it's a three-weft structure, and it's been cropped and further edited. That keeps me from getting bored weaving the same old thing, because this time it's actually a new thing!

Early tomorrow I'm off to Los Angeles for the Designing Weavers show and sale, so you won't hear much from me for a couple of days. Unless, of course, you're in the greater Los Angeles area, in which case I hope to see you over the weekend!
Posted by Sandra Rude at 5:56 PM

I had the same issue with my bobbin winder foot treadle. Doug changed it to an electronic treadle. No overheating issues now. :)

Good luck at the show. Hope you sell lots!

my sewing minus auto shutoff!
luck and fun in LA