The Sycamore is Woven

I spent much of the afternoon working on Christmas gift wrapping tasks: 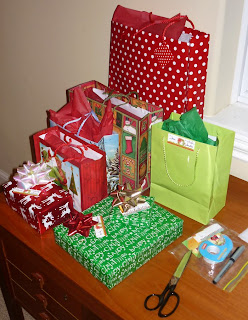 I find that the older (and lazier!) I get, the fonder I am of gift bags. If an item comes from the source in a box, I'll wrap it; if not, into a bag it goes. Much faster!

After that, I started up the jacquard loom and finished weaving the sycamore image. The rain's not so hard today, so the lighting was better - you can actually see the colors! The wefts were blue, white, and green; it should have been a darker blue. I am learning so much about the importance of value! 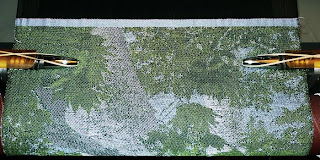 Very often, in a two-dimensional image, a dark or dull-colored object looks farther away while a light or bright-colored object looks closer. In this weaving, I think the the sky would look more like a background if it were darker than the pastel blue I used. It might be possible to paint it with thickened Procion MX, but I'll wait until after the piece is cut off the loom and wet finished before deciding.

A decision I've almost completely made (based on feedback from DH and some customers) is that these weavings need to be either mounted on a stretcher frame (like the small rose I posted here), or matted and framed. I'll use the portrait of Aileen with me and my sister as a framing test. My first instinct is to go for the stretcher idea, because it'll have the least impact on pricing - framing is expensive! - but I'll hold off on a choice until I have some finished examples to compare.

With either choice, however, I need to rethink the woven-in "signature" and date that I've been including in the bottom hem, oriented so the text is right-way-up when the hem is turned and stitched. Perhaps a template for a layer that can be added to every Photoshop file, with initials and a date, which would be placed near the bottom of the image. Placement would be different for the stretcher case than the mat-and-frame case... Hmmm. Some testing is in order.
Posted by Sandra Rude at 5:21 PM

Sandra, a few years ago when I was making a lot of art quilts, some of them quite small, I finally figured out that suspending them on a piece of wooden molding worked fine but didn't help people decide what to do with them. They needed the "hint" of matting and framing to realize that these were meant to be hung on the wall like a painting or photograph. I'm betting the presentation of your elegant tapestries in a similar way will help folks decide to buy. And yes, it's costly to have it done well, but the work deserves a fine setting.

i'd vote for the stretcher.if you could add in your flyer something about ancient tapestries and perhaps linking both the old and contemporary. after all tapestries were not framed.
i think it would drive the point home.
plus i must confess on my own bias about framing textiles

stretcher is a good idea, that is what I do with mine and they look a lot more professional than what I did before. Some (most) of them I stretch over a wooden frame. For an exhibition I have just delivered things for, I stretched some of them over foam board which also works very well

Sandra, can you tell me about your temples for the Jacquard loom....why the rubber bands? Are those AVL temples or your own device? and, on the subject of temples, how are you suspending the crocodile ones for your other loom? thanks,
Bettes