... a cautionary tale in which "something different, part 2" became a full-size sample.

So there I was, chugging along on the 3-weft version of the bamboo grove, but not really liking what was developing. As usual, when that happens it's because of the colors or values or saturation levels of the yarns I've chosen to work with.

I started out with 3 greens. One was a very pretty (but very subtle) pale green, one was a mid-value olive-ish green, and one a darker olive-ish green. The pale green, when combined with the black warp, just sat there and looked like a pale grey. Ick. It had no pop at all.

So finally (it took a while because I'm stubborn) I said "what the hell, this isn't working" and started trying other yarn colors. First, I swapped a bright lemon yellow for the pale green, which made the foliage stand out more, but didn't play nice with the mid-olive-green.

Then I swapped various other yarns in different combinations, even trying a bright emerald green as the "dark" yarn. Ewww! Who thought that was a good idea?

Finally, a positively fluorescent yellow-green, combined with a mid-value olive green a little lighter than the first mid-olive yarn and the original dark olive yarn made me happy. That was about 200 picks from the end of the piece... 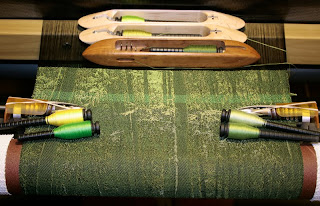 The loose pirns on either side of the weaving are some of the colors I tried and decided to flunk from the class.

So, if I were to weave this piece again, I know which colors I'd use. However, I was pretty happy with the "part 1" version that needed only 2 wefts (thus only 2 shuttles and faster weaving), so a new version is unlikely. It was, however, a good learning experience. Sample isn't a dirty word, after all.

Just out of curiosity, I looked back at my blog history, trying to figure out when I started on this warp. Turns out the 30-yard warp went on the loom back in June. I've woven a LOT of pieces, and still have many yards to go. Amazing how long a 30-yard warp lasts!
Posted by Sandra Rude at 6:14 PM

I'll bet this sample piece will be the most memorable one of the whole 30 yards, and the most fun, too!