After I posted pictures here of my workaround for beaming 60 ends of black mercerized cotton to replace 60 ends of rotty, weak, past-its-sell-by-date cotton, Neki asked for a workshop on how I rig up the auxiliary warp beam (aka cardboard mailing tube). Here goes! First, an overall view of the setup. Click the image to enlarge. 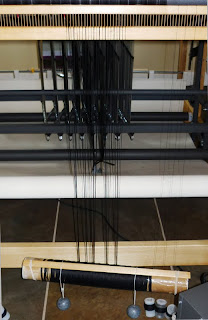 Ignore the film canisters; they're for the selvedge threads that I weight separately from the warp. Pretend they're not there.

You need the following items:

1. Cardboard mailing tube, bigger diameter is better. I use 3-inch, but if I had a 4-inch I'd definitely use that. Tubes with metal or plastic end caps are good - the end caps reinforce the cardboard. Length of tube - up to you. I mostly weave scarves or shawls or wallhangings less than 24 inches wide, so the tube I use is a 24-inch tube. The tube is your auxiliary warp beam.

2. Two flat sticks the same length as the mailing tube. I use two lease sticks from a long-gone rigid heddle loom. One will function like an apron rod, the other like a back beam.

4. Scotch tape. Not painter's tape, masking tape, or any other temporary stuff. You are going to use it to fasten an "apron rod" to a "warp beam" so you want it to stick for as long as the warp is on the loom!

5. Two 1-pound weights. I use round lead fishing weights that have a metal loop on one end, so I can run a piece of string long enough to go around the mailing tube with room to spare. You could probably substitute soup cans, but they'll hang down farther so you'll have to lower the auxiliary beam more frequently.

Make a warp of however-many warp ends you need, at least 1 yard longer than the main warp, because the auxiliary beam needs to hang off the back of the loom, which takes more warp length. I needed 60 ends of 20/2 cotton, to replace the rotty ends in a 15-yard-long warp, so I wound the replacement ends at 20 yards long (my loom is really long, because I had AVL build it with extra room between the back heddles and the warp beam).

Insert one of the sticks into the loop (or loops) at the warp-beam end. Distribute the loops (or knots) evenly on the stick.

Use the sticky tape to fasten the stick securely to the tube. I start with the tape between the tube and the stick, sticky side up, and arranged at an angle so that when I wrap the tape around the stick and on to the opposite side of the tube, the tape has somewhere to go without running into itself. I don't have a photo, but run the tape in the same way as I use the rubber bands later in the procedure. I believe (and experience has showed it to be true) that this holds the stick more firmly to the tube than if the tape simply goes round and round the tube, always in the same direction. 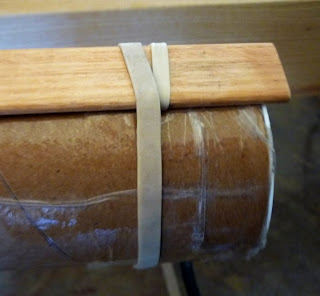 Begin winding your warp onto the auxiliary beam. As you can see in photo #1, the black cotton clearly is wound over more than 6 inches width of the tube. This is because I'm way too lazy to wind warp separator paper on a beam with just 60 ends. Instead, I do what a member of the guild I belonged to in the Bay Area did, and in order to keep the current layer of warp ends from cutting into the previous layer, I wind not straight on but in angles. First I wind at an angle until the edge of the warp is near one end of the tube, then I turn and wind back at the opposite angle until the warp is near the opposite end of the tube. It's okay, if you keep the tube perpendicular to the source of the warp, the tension will balance itself out after two backs-and-forths. Really. I've done this many times, and I always get acceptable tension.

After you get the entire warp wound onto the auxiliary beam, figure out where the second stick needs to go so it functions like a back beam and secures the warp and the auxiliary beam will hang far enough off the floor.

Use the method in photo #2 to secure the rubber bands around the stick and the tube.

The fishing weights (or whatever you've selected as alternates) then are placed so that the strings are equidistant from the current edges of the warp and the auxiliary beam hangs evenly from the floor. Strum the warp from side to side; if one side seems slack, move the weight strings to account for that.

Note that because the warp moves from side to side, as you periodically lower the beam, the weights need to move, too, to keep the tube parallel to the floor. I hang this contraption from the raddle that attaches to the back of the loom. If your loom doesn't have a raddle that extends off the back, you might need to use a straight-backed chair or something else to hang the auxiliary beam off. It needs to hang free, not encumbered by anything.

Okay? Got that? Let me know if you have questions. Once you get it into your hands, you'll see what needs to be done. It's all logical, really. Yes, really. Go for it!
Posted by Sandra Rude at 7:15 PM

YAY!!!thanks.
those riggings are very useful to know. this is precious so i'm saving the whole page to my hard drive, no delicious here.

Very interesting, Sandra! I am curious - why did you have AVL build your loom with extra space between heddles and warp beam?

Hi, Debbie,
It's so I can fit me (nearly 6 feet tall, broad in shoulders and hips) and a chair in there when I tie a new warp onto the remains of an old warp. The old warp is left in the reed and heddles, with about 12 inches behind the heddles. I treadle plain weave to insert lease sticks there. The new warp has lease sticks too, so I can be sure the threads stay in the right order. But there has to be room for me and the chair between the two sets of lease sticks.
-- Sandra

Ah - so you are tying onto a dummy warp, but in reverse from what I would do, since I warp front-to-back. I would leave the remnant warp on the warp apron, left in the heddles and reed, and tie on between reed and front beam. I have a Macomber, whose front beam folds down to the floor, so I can get it out of the way.

Very clever Sandra, am going to copy that whole page too, am sure it will come in handy at some stage!

I have been reading your blog for a long time and like all of it. I weave since 1 1/2 year so all the information is welcome. I like this idea about this dummy warp verry much. Since I am Dutch most of the englisch I do understand but this peace I am not sure of.

I wind not straight on but in angles. First I wind at an angle until the edge of the warp is near one end of the tube, then I turn and wind back at the opposite angle until the warp is near the opposite end of the tube. It's okay, if you keep the tube perpendicular to the source of the warp, the tension will balance itself out after two backs-and-forths

How do you make the angle and do you turn the tube? How?

Is it possible to make a second warp beam this way?

Greetings from the Netherlands

THANK YOU for the clear directions! I just found myself needing to do this. Although I had to make a few adaptations, it was only because of what materials I did & didn't have on hand.

I couldn't have done it without you!