We're back home now, but I have a few shots of our last day in Hanoi to share. Mostly we just walked around the city, enjoying the sights and sounds (and smells). For one thing, it's *noisy*. There's no prohibition on using auto or cycle horns, and people are generous with their horns. Also, there are more motorcycles/motorbikes/motorscooters in Hanoi than there are people! The streets are crowded, and nobody bothers to pay attention to the lane markers or directional signs - you just drive toward your goal, on the sidewalk or on the street, no matter. Drive round the roundabout the wrong way? No problem. Pedestrians, beware! There are zebra crossings marked, but the stripes just give the drivers a better line of sight to aim at you. You're supposed to thread your way between moving motorcycles, taxis, trucks, and buses. Only once did a motorscooter actually stop for us as we negotiated a zebra crossing; the driver was a young girl, and she may not have wanted to file a police report for an accident. Running down a tourist, Oh My!

It's popular to have your wedding photos taken out of doors, near famous (or not-so-famous) buildings or monuments, and we saw lots of engaged couples having photos taken. Sometimes a photographer has 10 or more couples lined up ready to be photographed. 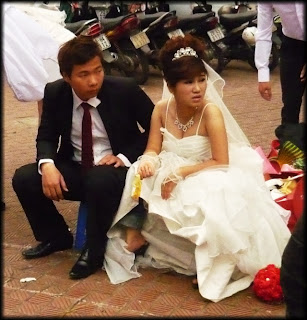 Notice the blue jeans showing under the bride-to-be's gown, above. No changing room required - we saw one young groom-to-be stripping down to his undershorts, then putting on a dark suit for the photo shoot. On the street, in full view. 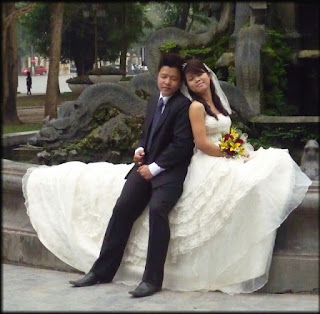 The other side of this bride's gown was draped in the water of the fountain. No worries, it's a rental. If it gets trashed, she doesn't care. For the actual wedding ceremony (which lasts several days), they'll both be wearing traditional Vietnamese clothing.

We saw the same thing in Russia last summer - lots of couples in wedding attire posing for photos in public places.

In the pre-Communist era in Vietnam, houses were taxed on the length of street frontage, so the traditional house is very narrow - standard is 4 meters (a little over 12 feet). The small green house below looks like 2 meters (6 feet). The tax laws are different now, but the tradition continues. We saw numerous new home construction sites with the same profile - 4 meters is very common in cities, although in rural areas some folks build wider homes. 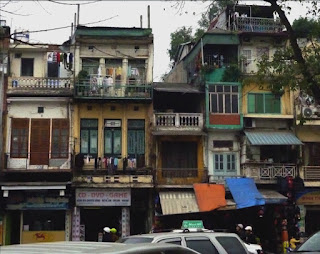 Before we left for the airport and home, we decided to see a performance of the Hanoi Water Puppet Theatre. What a treat! The puppets are maybe 18 inches tall, and controlled from behind a screen by puppeteers with a pole and strings that control puppet movements. Each act of the performance told a Vietnamese legend or showed a traditional story-dance. The dragon and the bird, for example, represent the parents of the Viet people. 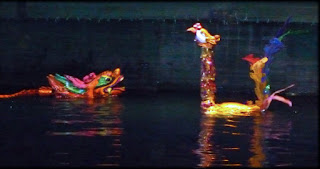 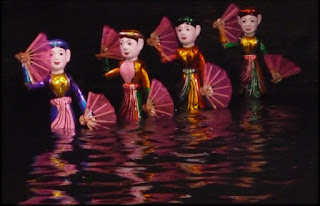 After the finale, the puppeteers came out from behind the screens (wet to the waist) to take a bow.

It was an absolutely charming show, with a talented traditional musical ensemble providing accompaniment, and a wonderful final act to our trip. After that, it was 26 hours in planes and airports and cars to get home. Gracie the cat was glad to see us, but she hasn't stopped yelling at us for leaving her for so long, ever since we walked in the door.
Posted by Sandra Rude at 2:50 PM

Welcome home! Looks like you've had a terrific trip. Have a great weekend.

I will be heading the other direction with a slightly shorter trip, in April/May... :)

Welcome home, noisy kitty and all!

Sandra--Thanks so much for taking us along on your trip. I really enjoyed my virtual trip to Vietnam, a country I will otherwise probably never have the opportunity to visit. I hope you can get your body clock back on California time easily and painlessly. I always found those trips where night & day reverse to have an especially slow recovery time.