The loom was apparently feeling more cooperative today, and I was able to complete both the second and third motifs of the design. 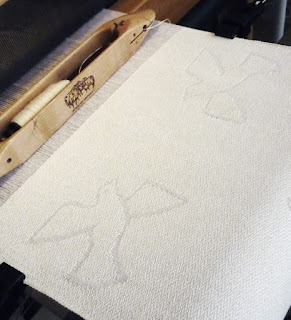 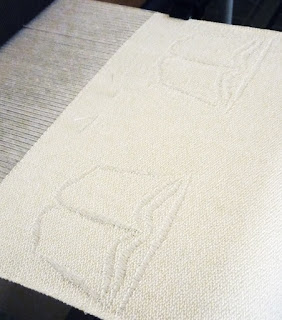 These are shown in the order I wove them, not the order they'll appear on the stole. On the jacquard, one always weaves from the bottom upwards.

Early in the design phase, I trawled the 'net long and hard for appropriate images. The ones I've chosen are all included for a reason. For example, the Jesuits are very often scholars and/or teachers (Uncle Jim has been a teacher in many different environments: Loyola High School in Los Angeles, English as a second language to Spanish speakers, etc.) so the book (which could be a textbook or a bible) belongs there.

The next design motif is the Jesuit logo, which consists of more fine detail than the ones I've woven so far on this project, so I'll be interested to see how well it "reads" in the cloth.