Some time ago, Callie Booker took some photos at a local reservoir in the Dundee, Scotland, area. I liked the images, and asked permission to weave some of them. The first one was woven in 2011, and since sold.

The second is now on the jacquard loom. Here's the original photo, after some cropping and reducing to 13 hues (some cream, some tan, some grey): 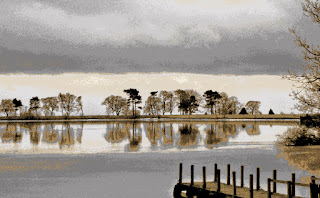 And here it is on the loom, at about the 300-pick point in the process: 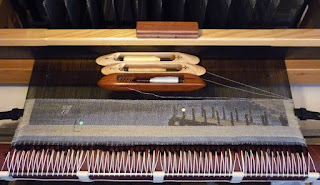 The colors are more saturated in real life - but the camera didn't want to capture them... I'll try again tomorrow.
Posted by Sandra Rude at 9:41 PM

Oooh, I am just catching up! Nice to see the reservoir coming to life on the loom.