You might remember that back in this post dated June 1, I had just resleyed the jacquard loom.

I have now sleyed it yet again. Why? Turns out there were four (count 'em, 4) places where there were 2 dents worth of warp ends in one dent. Scattered over 7 modules, from far right toward the left side. I didn't notice (20/2 cotton being what it is - skinny) until I tried to weave, and found places where the loom simply couldn't open the shed properly because the thread density was too tight, and the weft would bubble. 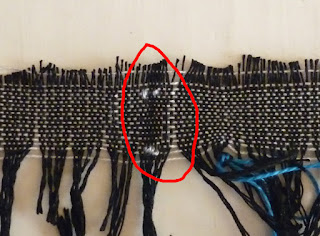 So I have now cut off the warp ends, re-sleyed to the proper width, re-centered the reed in the beater, re-lashed onto the apron rod, re-tensioned the lashing cord, and woven a test strip of plain weave and a small satin to check that all is now good to go. 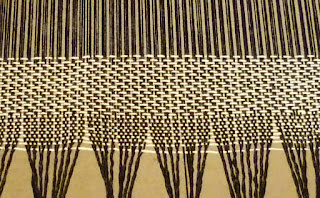 And we're now back to square one... 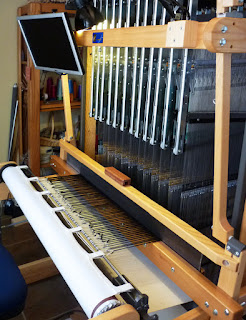 I still haven't decided which of the queued designs to weave, but at least I have a better degree of confidence that it will weave.